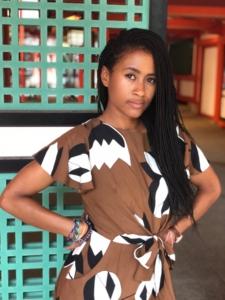 Dr. Sará King is a Mother, a neuroscientist, political and learning scientist, medical anthropologist, social entrepreneur, public speaker, and certified yoga and meditation instructor. She is an internationally recognized thought leader in the interdisciplinary field that examines the role of social justice, art, and mindfulness in neuroscience.

She currently works as an NIH post-doctoral fellow in Neurology at Oregon Health Science University (OHSU) in the Oregon Center for Complementary and Alternative Medicine in Neurological Disorders.

Dr. King is also a member of Mobius, a non-profit supporting compassion in tech, is guest faculty in the MNDFL mindfulness certification program, as well as she is the Co-Director for the Embodied Social Justice Certificate program alongside Rev. Angel kyodo Williams and Dr. Rae Johnson.

Since 2019, she has been awarded several prestigious fellowships, including the Oregon Fellowship for Diversity in Research, the Society for Neuroscience Neuroscience Scholars award, the Garrison Institute Fellowship and the Restored Warriors Fellowship. She is also a part of Google’s Vitality Labs – their well-being think tank, as a resident expert in the relationship between individual and collective healing and well-being.

Dr. King is the creator of the “Science of Social Justice” framework for research and facilitation which stipulates that well-being and social justice are one and the same thing, as well as the “Systems-Based Awareness Map” a model of the relationship between individual and collective awareness and well-being. She has been invited to give keynotes, offer scientific consulting, creative collaboration, and to create trauma healing circles and meditations based off of her research for Nike, the Jordan Brand, the Ford Foundation, the Museum of Modern Art, Google, The Greater Good Science Center at UC Berkeley, Oxford University, Columbia University, OHSU, UCLA, UCSF, and Harvard Medical School, among others.

Dr. King is a regular collaborator with the Museum of Modern Art in NY. Her first collaboration with the MoMA NY was a meditation based off of her “Science of Social Justice” research framework, reocrded through their “Artful Practices for Well-Being” project. This marked the first time that a Black woman scientist has had her original scientific framework featured as a part of an internationally acclaimed art exhibit – featuring the work of the world renowned African-American artist Betye Saar. It will be on display – in person and virtually – at the MoMA for all of 2021. Dr. King’s second collaboration with the MoMA, entitled “The Art and Science of Hope and Justice” was developed with her mentor Dr. Dan Siegel and their colleague, musician and poet Orlando Villaraga. This project was picked up by the United Nations and the World Health Organization to be launched as a part of their 75th anniversary celebration. Her most recent collaboration with MoMA NY was “Awareness and Art as a Catalyst for Healing” with Orlando Villaraga, the first university-affiliated study in MoMA’s history.

She has also recently worked closely with the Ford Foundation for Social Justice in NY, and the Huntington Library and Art Museum in California to create meditations curated specifically for their world-class art collections.

Sará received a B.A. in Linguistics, and a B.A. in Black Studies from Pitzer College in 2005, minoring in Spanish. Afterwards, she received a Masters in Afro-American Studies and Political Science from U.C.L.A., where she concentrated in Education. During her M.A. program, she studied the politics of the post-racial phenomenon and it’s implications for pervasive educational inequalities.

Recently, she earned her Ph.D. in Education at U.C.L.A. in 2017, in their division of Urban Schooling, where she concentrated in anthropology and neuroscience to develop her methodological approach as a mixed-methods researcher and ethnographer. Sará is honored to have been mentored by her advisors Dr. Thomas Philip (U.C.L.A.) and Dr. Mary Helen Immordino-Yang (U.S.C.) during her doctoral program.

Her dissertation research examined the way low-SES urban students express resilience, navigate well-being, and complex interpersonal relationships in the context of a school-based yoga and meditation intervention, making history as the very first in U.C.L.A.’s department of education to explore the impact of yoga and meditation in urban schools from a neuroscientific and critical theorist/anti-oppression point of view.

Dr. King is also very proud to have been a participant in the Dalai Lama’s Mind and Life Institute Inaugural International Research Institute in Kyoto, Japan in 2019. Here, she was one of 75 thought leaders and scholars in the field of meditation research invited to discuss the the latest advances in research in neuroscience, psychology, and Buddhist philosophy to produce innovative approaches in the advancement of contemplative studies.

Her research and writing have been featured in Lion’s Roar, Yoga Journal, Yoga International, Voyage LA Magazine, and the Journal for Contemplative Inquiry, and she speaks regularly at conferences merging science, spirituality, contemplative practices and well-being such as the Collective Trauma Summit, The Science and Non-Duality Conference, Wisdom 2.0 and the Well-Being Summit.

In 2021, she was named “One-To-Watch” by Mindful Magazine, as well as she made the November cover of Yoga Journal Magazine as a “Game Changer” for her work bridging science, social justice and contemplative practices.

Most recently, in 2022 she was also named one of the “Ten Powerful Women in Mindfulness” by Mindful Magazine.

As a former college athlete on the Pomona-Pitzer dive team, and life-long lover of movement and dance, Dr. King has always been fascinated with the relationship between wellness and embodied healing practices. She has been an avid student-practitioner of vinyasa yoga, as well as a student of Mahayana and Theravada Buddhism for 14+ years.

Her passion for studying contemplative practices and yoga led her to complete the 200 hr. Awakened Heart, Embodied Mind yoga teacher training at Exhale Yoga with Julian Walker and Hala Khouri. In this program she was trained to teach yoga in a trauma-sensitive way that incorporates an understanding of somatic therapy and neuroscience.

Following her 200 hr. yoga teacher training, she completed a 6-week training in mindfulness meditation at U.C.L.A. through their Mindful Awareness Research Center.

Afterwards, she completed a 5-day Yoga, Purpose and Action Leadership Intensive with Off The Mat Into the World, with Hala Khouri, Seane Corn, and Susan Sterling where she deepened her understanding about the relationship between social justice practices and yoga.

In total, she has completed 86 days of vipassana/silent meditation retreat practice in the Buddhist/Insight Meditation lineage. She is dedicated to maintaining a daily meditation and yoga practice as an integral part of deepening her personal practice and ability to live what she teaches.

Dr. King is a proud wife and mother to one magical daughter – her family and sangha of friends inspire and motivate her to practice and to continue to open her heart more than anyone.

She loves spending time in and around the ocean (pretty much anywhere) and especially hiking through the redwood and oak forests of Northern California.